When my husbands aunt asked me to design her daughters baby shower invitations I asked her what theme she was going to go with and she said well Rachel’s favorite movie when she was little was “The Little Mermaid” and I thought okay, what about a mermaid theme but take it away from Disney and play off her favorite color Mint, which is also one of her nursery colors. She said yes!

We then planned a meeting and I landed myself in charge of the decorations, which honestly is one of my favorite things to do. I love decorating for a party, or decorating a home. It’s a calling I didn’t really know I had in me until recently. Anyways! I was in charge of all the decorations, and where they were to go and what was to unfold. I started with the photo wall backdrop and started looking on Pinterest for ideas. Here is the page I created for Rachel’s Baby Shower you can follow it below or just check out where my ideas came from;

I researched a ton of different balloon arches. I wasn’t sure what way I was going to go about it, but I didn’t just want a balloon arch I wanted a colorful ocean backdrop. So I took the colors from the invitation I created and went to Michael’s to see what I could cook up. While I was there I purchased a ton of card stock in the colors for the party (mint, purple, pink, & a little blue) and a fiskar circle punch. I purchased the balloons, Balloon Pump

from Amazon. The mini clear balloons I picked up from Party City.

Here are all my supplies;

When I got home I got to work to figure out the circle punch, I figured out I could do 9 circles per page and I could successfully cut out two pages at a time so 18 circles. I did roughly 2-3 pages per color in the books of card stock that I got (each book of card stock had an array of colors and I just chose the ones that would best fit my particular project) Okay so I used 46 circles in my draping. Two rows of the circles is one long string, you can see at the bottom how it doesn’t end. I wanted that to be the illusion.

Then you guys I freaking sewed everything, with a sewing machine. I just used white string and fed each on of those circles through it in the middle. Tied it up at the top with some string, and called it a day! It was a lot of work. Two days with an almost two years old. But it’s so pretty and I am still looking at it as I type this post. After I finished the backdrop later in the week the night before the party I did the balloon arch I needed some help from one of my friends to pick exactly where the clear balloons went so I’m glad I waited for her. All you do for the Balloon arch is get the balloons blown up and then put them into the Balloon Deco Strip

I did them ever other balloon and then when I changed colors I put a 3 hole space for filler balloons. After we got those up we added the white balloons and the clear balloons with the Balloon Party Dots

, and prayed nothing would fall off before the party. 3 Days later and it’s still looking pretty fabulous. it was a labor of love but I am going to try to save this and use it again sometime in the future.

Here are a few of my other decorations for the Mermaid Themed Baby Shower. The cake and cupcakes were by tsp Bakery 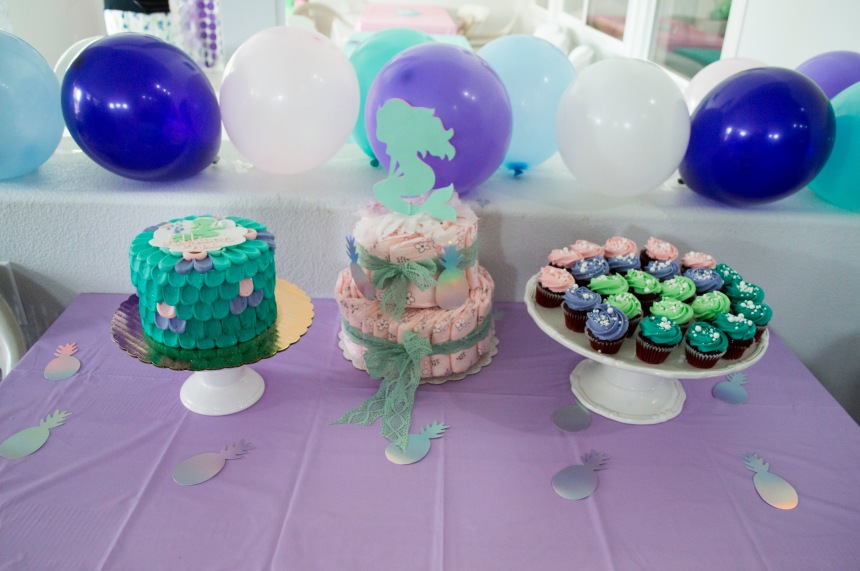